The lovely Miss Cole tagged my show some pictures of my workspace, which was great at first… except that we’re not quite done unpacking from the move and things are still a mess.

OH WELL. TOO LATE TO BACK OUT NOW, ONWARDS WE GO.

Oh man, what a mess. Maybe I’ll do another share when I finally get this place in order. That’ll be the day… :)

Yikes, it feels like weeks ago that I was panicking about it being 2014. Now it’s August. This whole year has basically been one long stretch of me panicking about how quickly time is flying past, and I’m still feeling that panic.

But I’m here. Back home in my cosy little website after some time away. So let’s slow it down and get back into the swing of things, shall we?

The last few weeks have been a bit chaotic, but remarkably, my reading habits have remained steady throughout.

My favourite read lately has been THE FALCONER by Elizabeth May, a fast-paced crossover historical fantasy novel. It’s the story of Kam, a debutante who keeps ditching dances and tea appointments so she can hunt down faeries across steampunk Victorian-era Scotland.

If that description doesn’t sell you on this story, I’m not sure what else I can do. STEAMPUNK SCOTLAND. FANTASTICALLY-RESEARCHED CELTIC MYTHOLOGY. SPOT-ON SCOTTISH ACCENTS.

I looooveeee it. I love the UK cover, too. It’s so fiery and beautiful.

Now, onto The Scorpio Races by Maggie Stiefvater, which so far has been giving me similar feelings of Celtic pride. It captures the island life perfectly.

I’m still in the end stretch of my WIP, which got waylaid a bit during the last few weeks when Iv was unable to get any writing done. Still close to the finish line.

I’m actually in that odd stage of intense writing where things like exercise and sleep fall by the wayside. That’s great in some ways, but it has obvious knock-on effzzZZZzzzzzz

I’m just going to use this space to post cute dog photos today. Here we go, have Mac (my labrador) and Gizmo (my parents’ Lhaso Apso) after a very brief falling out.

Also, a bonus picture of the port town of Ullapool.

I’ve been involved in some fun little Twitter projects where I hear my own accent recorded, and the accents of those I know. That’s been very cool.

My running’s been on pause lately due to injury, but I’ve been doing long stretches of walking instead which challenges me in different ways. 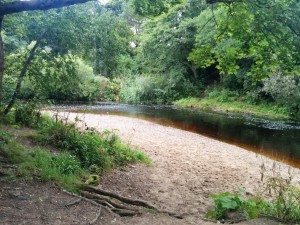 All in all, I’m just kinda chillin’.  Taking things slow. I’m looking forward to catching up on what everyone’s been up to!

Three months ago, after nearly killing myself by trying to keep up with the jogging club at work, I started Zombies Run! 5k Training. I’ve been keeping a record of all my runs and taking photos as I go, but I’ve hesitated about posting too much of it here — I don’t feel like a “real” runner yet, especially when I still take lots of breaks to recover from injuries, and I’m still slow as all hell. But hey, there’s no point letting such a fun post rot in drafts. I’m proud of myself for getting off my butt, getting out there, and running! :D

10 min walk __ 1 min walk 15 sec slow run (Repeat x10) __ 10 min free-form run Day 1 (21st Feb): Tried to do ZR!5k last year but stopped it (due to laziness), joined the work jogging club yesterday and…. well, for a complete jogging newbie, I didn’t do too bad. Managed around 1km at a constant jog but really struggled because I’m used to ZR!5k intervals and my colleagues are mostly ex-RAF and used to constant paced jogging. So it’s back to the 5k training so I can join in with the cool kids club. :) Still a little beat up from yesterday’s jog so today will be a gentle start with W1D1. (I was still a little lost on W1D1, so I lurked around various running and jogging forums to try and figure out how to do this whole running thing.  The Runner 5k reddit was one of my favorite haunts. The most important advice I found was that my legs should give out before my lungs. The point of training programs like Couch-to-5k and Zombies, Run! 5k is to build distance and stamina, not speed. Even if I was just shuffling along, my muscles would build up and I’d be able to up my speed later.) Day 2 (24th Feb): Just finished W1D2! Wasn’t sure I’d be able to because my calves were still aching, even when I’m just walking. But I kept my jogging speed as slow as possible, shuffling along like an old lady, and I got through all the drills with energy to spare for the freeform run. I’m looking forward to Wednesday’s run now. :) Day 3 (26th Feb): First week completed, on my rest day today and starting Week 2 tomorrow. A little nervous about the change in pace (more nervous about Week 3 though! That jump to 5 mins! O_O). But it’ll be worth it. 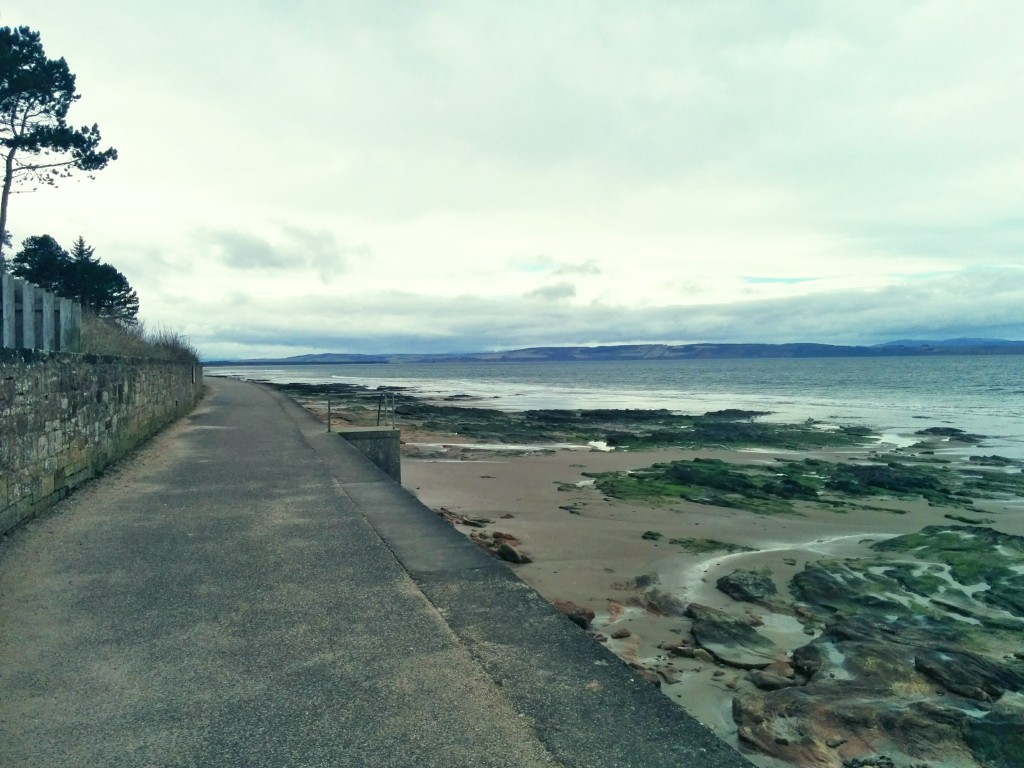 Day 2 (3rd March): Morning: I’m in the Week 2 aches ‘n pains stage and aghhhh I feel so lousy at this. Not looking forward to Day 2, still got a lot of aches and pains. Week 1 was mostly calf pain but in Week 2 the pain has moved to the front, to my shins. Definitely going to take it slow and careful today. Afternoon: Just finished Day 2 and the pain’s moved away from my shins and back to the calves, so I think I’m in the clear for shin splints, at least for now. The heel lifts definitely help. My muscles started cramping up at the end of today’s run though, owowowww. Day 3 (7th March): Finished Week 2 on Friday after skipping Wednesday due to an injury (nothing running related… I tripped over my Labrador and pulled something, haha). I thought I might be slower after the break, but I had more stamina than ever before. Lesson learned: injury rest breaks are the best. (Injury breaks ARE the best. There were even a few successful runners recommending to take two days off between the later parts of the 5k training. Recovery days are ridiculously important at this stage of getting fit.)

I went to bed early last night for the first time all week, and I’m now more tired than I’ve been all week. Wednesdays are ridiculous.

What am I… what am I read…buh?

I READ LUMBERJANES ISSUE #1 AND IT WAS A GOOD COMIC I REALLY LIKE COMICS THE END.

Still trundling away at the WIP. Scenes are trickling in unexpectedly out of random songs and long walks. Momentum remains slow but ever-forward.

I even posted my June 2014 writing goals!

Early on Tuesday morning, I had a dream where I’d given my latest WIP to a beta reader. They kept highlighting my own in-line comments with their own notes: Cut: Self-doubt.

“This isn’t as bad as you keep trying to convince us it is,” she said.

Thanks, subconscious. That’s a bit symbolically on-the-nose, but oddly motivating… 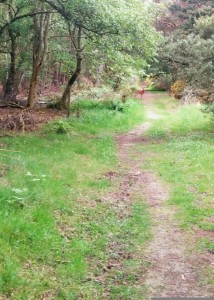 I hope everyone’s June is going well so far!

Finished Week 4 of my 8 week Zombies, Run! 5k training today with a nice run along the Nairn river/Cawdor trail.

It’s a really fun trail to jog along, though once you pass the Firhall Bridge it climbs steeply only a narrow “cliffside” trail and becomes a walking/hiking trail that’s not much use for running. 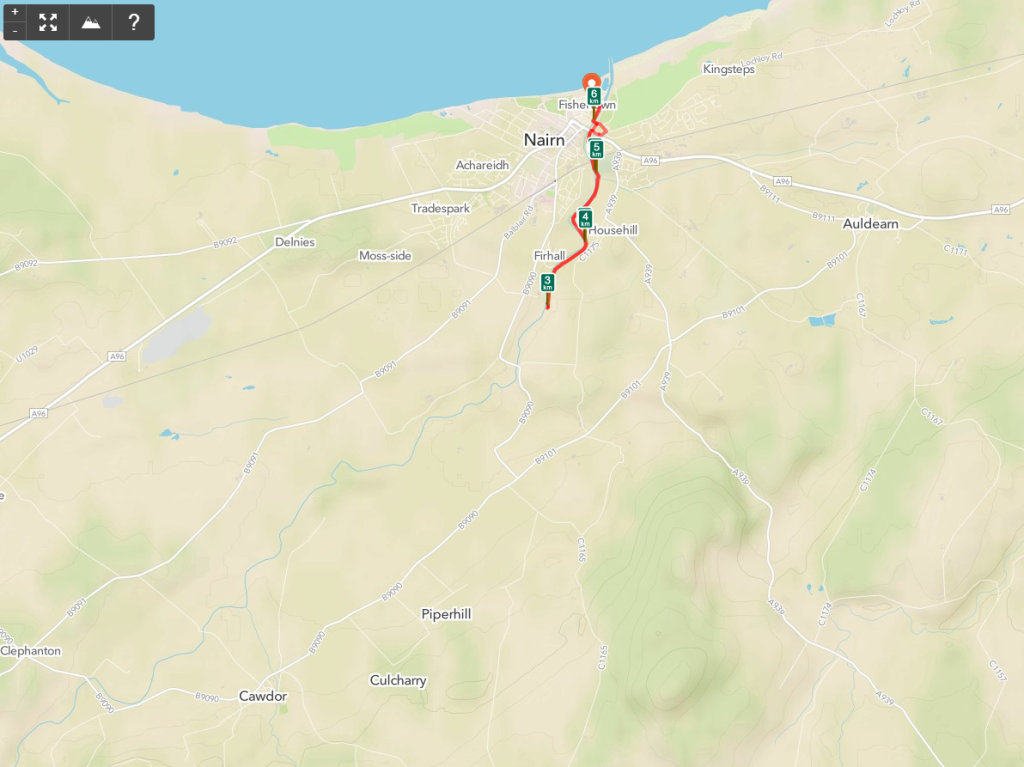 The trail extends waaaay past my little red line to Cawdor in the bottom-left. I’m hoping to go the full journey some time, but I’ll definitely not be running! Maybe I’ll walk it with Dave one sunny weekend.